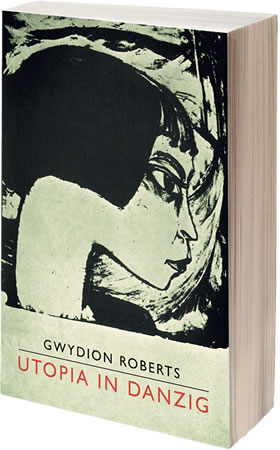 My debut novel Utopia in Danzig

A long time ago, back around 2007, I started writing a play, which turned into a novel. It became something I kept re-writing, a story about a girl on the run who enters a mysterious hotel where people can never leave. I eventually settled on a name for the novel: Utopia in Danzig.

I began sending out the opening chapters to agents, lots of agents, to no avail. I engaged the help of an editor, and now finally it’s as ready as I feel it can be. To anyone about to read it, enjoy.

You’re a hit man who doesn’t hit much, and isn’t much of a man, by your own estimation. Then one day you and your companions pursue a girl into the lair of an alchemist, a place where your inner-most desires come true. Welcome to the Happiness Hotel, where you will never want to leave, even if you could.

Utopia in Danzig is the debut novel by Gwydion Roberts. Located in the bleakness of fictional Yiddishland in northern Europe, it’s a surreal, twisted story of repression and release, gender and transition, and of having the freedom you always wished for.

It was eight years in the making, the novel where I learned how to write, by writing, and re-writing. You may have lots of questions; I’m going to try and anticipate some of them here, and hope my answers satisfy.

Why are you writing under your former male name of ‘Gwydion Roberts’, and not ‘Gina Maya’?

Why are you writing under your former male name of ‘Gwydion Roberts’, and not ‘Gina Maya’?

Partly for reasons of genre. Utopia in Danzig is a surreal story and one to be labelled under ‘magical realism.’ Here at Edinburgh University, I began working on a second novel, and the genre is different, more literary fiction in style. Perhaps my style will split into two genres, one a more experimental kind of magical realism, the other a more conventional literary fiction. Maybe I’ll need two different author names, and ‘Gwydion Roberts’ is certainly a name that’s a part of me, of my personal history, for the first 40 years of my life.

What if everyone hates it? Twenty-four agents rejected it. What if the author should simply disappear afterwards? I’m sorry, this isn’t a good reason, I should be boasting about this story, but my self-loathing recently has been so intense, and maybe it’s not always a distortion. Maybe as this novel sinks like a stone, it can take my old name with it.

I started writing it as a play while working in Cairo, in 2007, one that kept developing, amorphously. At some point in 2009, by this time living and working in Senegal, I changed it into a novel because I felt it could add a dimension (and on a more cynical note, I couldn’t see how a play would sell). I continued writing when living and working in Saudi Arabia (2011-2015). During that period, I got married, and divorced. I think all those situations, of living in foreign lands, some of the different people I met, all impacted on it, especially from my time in Cairo. Being repressed as a closet trans person also was a driving force, of wanting to write female characters, as well as creating a trans character, I guess as a kind of avatar, or avatars, for an existence I couldn’t image for myself in real life. My personal relationships at this time also influenced certain aspects, regarding the bewilderment, anger, loss of confidence and insecurities that magnified during this period. I do think Utopia in Danzig is a story driven by repression, in different ways.

While I was in Cairo (2007-8), I was recommended a book written by Iain Banks, called The Bridge. This had a slow-burn, significant impact on me, and still does. I would even say – for the sake of a simple description – that Utopia in Danzig is a cross between The Bridge and Alice in Wonderland. Though the more I wrote it, the more it became its own thing, and of course, my own personality, experience and style makes it something distinctively mine, at least I think so.

It’s from Max Kaus, an artist whose work I love. I think his pictures are sinister, but some, like this one, are also beautiful. I think the combination captures what I’ve done in the story. As for the woman in the picture herself, there is a character in the story who resembles her physically, to some degree, and who represents an ideology that grows in the story, so the cover isn’t just about conveying mood.

Is this a ‘transgender’ novel?

Is this a ‘transgender’ novel?

No, I don’t think so. One of the major characters is trans (as far as ‘trans’ can mean anything substantive), but this is a story of several characters, all repressed in some way or other. And I’m actually glad this isn’t just a story about being trans. In all honesty, I just let the characters of the story develop, I didn’t try to be ideological, or to focus on one person.

The characters are all Jewish, and it takes place in an imagined Jewish State in Europe. You’re not Jewish, so what gives?

The characters are all Jewish, and it takes place in an imagined Jewish State in Europe. You’re not Jewish, so what gives?

Partly it’s an exploration – and yes, a cultural appropriation – based on expediency from an artistic point of view. I wanted to create a country as a backdrop for my story in Europe, a place where I had more freedom to write the history of the place, as well as its future. And ‘inventing’ a post-war Jewish State had a validity to me. I’m thinking partly historically, because the nation chiefly responsible for devastating Yiddish civilization, Germany, lost a lot of its eastern territories at the end of the Second World War, and I decided to re-imagine this as a situation in which a large chunk of that land, which is to say eastern Prussia, which in reality was split between Poland, Russia, and Lithuania, was given to the Jews to make a European country of their own.

Of course, it’s a flawed premise to some degree, I’m not naïve enough to think of this as the ‘what-should-have-been.’ I think by 1945 that Europe’s Jews just wanted to get the hell out of Europe; just as importantly, the building blocks to Israel were already in place by 1945. But still, it provided a premise that I found fascinating, a Europe in which Israel was built on its northern Baltic shores, in some of its original Yiddish heartlands. I should add, though, that it serves as a backdrop; Yiddishland is not the driving force of the story. Self-repression, compassion, greed, friendship, loneliness, and several other aspects relating to humanity are what drives the story, and its characters.

That’s a lot of themes

That’s a lot of themes

Okay, to boil down it down to a single theme, and into one sentence, I’d say that Utopia in Danzig is about whether you can live only for your own pleasure and happiness.

For a long time, I felt like not publishing it. I had lost confidence in it, especially after one particular criticism. Now I feel like it’s a part of me, and it feels more valid, as an artistic expression and as a way of seeing the world. And if it proves to be unreadable or just plain mediocre to everyone who tries reading it, then there’s no harm done, it’s just a story.